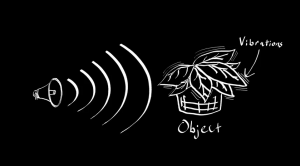 The researchers at MIT have created a way to use high speed cameras and even low quality cellular phone cameras to recover audio from relatively still looking video frames without a microphone.  They can simply look at the pixel movement of the video frames to uncover the acoustics as they call it a visual microphone.

They call it the Visual Microphone.  Take a look at the project page.

The ability to repurpose the technology into spy tools and military applications like drones and high resolution satellites let alone space exploration seem obvious.  Not to mention simply recovering audio from security video from cold cases.