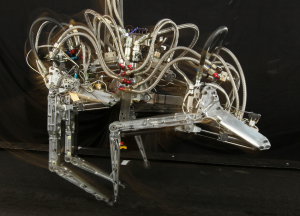 Usain Bolt is undoubtedly the fastest man in the world.   Now robots have been developed that are capable of running faster than that.

The Cheetah Bot clocked in at 28.3 MPH. This was accomplished on a treadmill and DARPA hopes to move to an outdoor build next year that it has named WildCat.

When they start changing the naming system to “T” we’ll sound the alarm.