China’s New Drone, The Mind is the Limit 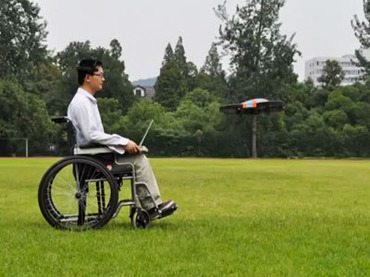 The Pervasive Computing Group from Zhejiang University, China, released last Wednesday a video of their new drone control system. It uses an EEG headset to interpret the brain signal of the user and transmit via blue tooth, to a wi-fi enabled laptop. From there a program translates the signals to commands for the quad-rotor drone, up/down, left/right, forward/back, and of course, take a picture.

Below is the demonstration video.

While there is of course the immense fun factor of controlling a RC with your thoughts, the Intelligence and military aspects of this type of system are even more Amazing/Disturbing. The ability of soldiers to control a drone for recon of a fight happening just one block over and never have to take is hands off his weapon, is priceless. Or of a spy, using a $500 drone to monitor a meeting of POI’s, able to be close and take action quickly if needed, versus a $200m global hawk that is far from the situation, and only able to take action in the sense of missile strikes, causing possible civilian deaths.

The technology will be showed off next week in Pittsburgh for the ACM International Conference on Ubiquitous Computing, or Ubicomp Conference.